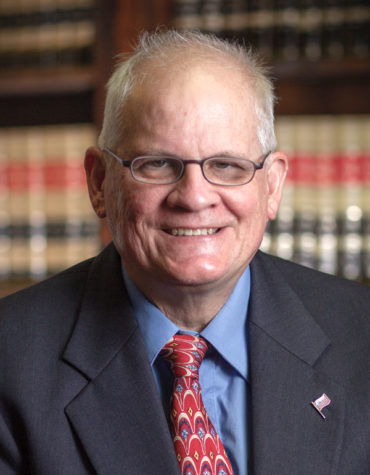 Al Benshoff graduated from the University of Michigan with a Bachelor of Science in Natural Resources. He briefly worked as a contractor for the U.S. Department of the Interior, Bureau of Outdoor Recreation (now the National Park Service) before working in environmental compliance for National Steel Corp. He later received a Master’s Degree in Regional Planning from the University of Michigan.

For many years, he worked as a planner, first for the Beaufort County, S.C. Planning Commission, and then for the City of Cary, N.C. where he oversaw the adoption of the first Unified Development Ordinance, the construction of the first five miles of greenway, and several comprehensive plans. While working in Cary, he attended the evening law program at N.C. Central University School of Law, in Durham, NC.

After receiving his law degree, Mr. Benshoff became the City Attorney for Lumberton, N.C. and then served as the City Attorney for Concord, N.C. Some of his accomplishments in Concord include litigating a major zoning challenge to the new Cabarrus County jail, re-writing the Concord Development Ordinance, obtaining and defending Inter-Basin Transfer Permits from the Yadkin and Catawba Rivers to Concord and Kannapolis, assisting with the redevelopment of “Brownfield” sites, and organizing community development and the construction of the joint Albemarle-Concord- Kannapolis water pipeline.

Mr. Benshoff provides general legal counsel to the Towns of Gibson, Mocksville, Oakboro, Sedalia, and Stanfield. He has worked with other local government clients, including the Towns of Aberdeen, Carthage, Carrboro, Creedmoor, Selma, Holly Springs, Pinebluff, Robbins, the Lumberton Convention and Visitors Bureau, the Cities of Kannapolis and Roxboro, and the Village of Pinehurst. He practices in the areas of real estate development, code enforcement, contracts, economic development, annexation, land use and zoning, eminent domain, housing authorities, personnel, and community development, including U.S. Housing and Urban Development programs.

Mr. Benshoff is licensed in the North Carolina state courts and U.S. District Courts of the Eastern, Middle and Western Districts of North Carolina, as well as the U.S. Fourth Circuit Court of Appeals. He is an active member of the North Carolina Bar Association, where he has served on the Section Councils of both the Government & Public Sector Section and the Zoning, Planning and Land Use Law Section. Mr. Benshoff recently received the Grainger Barrett Award for Excellence from the Government & Public Sector Section. Also, from 2017 to 2019 Mr. Benshoff served on the Board of Directors of the NC Association of Municipal Attorneys. In the community, he serves as the President of the Board of Directors of two non-profit corporations providing housing to low income seniors in Cabarrus County, the Methodist Episcopal Senior Housing, Inc. and Housing Episcopal Methodist Presbyterian, Inc.